The death toll from the historic winter storm sweeping across large swaths of the US has increased to at least 21 – as over 3 million people in Texas remain without power, including 1.4 million in the Houston metropolitan area, according to reports.

No relief is expected until the weekend, officials said.

Four people were killed in a house fire in Sugar Land, Texas, where the power was out, according to police and local media.

In South Austin, hundreds of residents waited in a seemingly endless line that stretched down Congress Avenue to buy supplies at a newly reopened H-E-B, according to the Austin American-Statesman.

“We knew a week in advance this storm was coming. ERCOT should have had a backup plan,” Texas Gov. Greg Abbott said during an interview on KLBK, referring to the Electric Reliability Council of Texas, which provides 90 percent of the state’s power.

“Let me give it to you straight,” she said on Twitter late Tuesday. “There’s a possibility of power outages even beyond the length of this storm.”

Critics have long argued that the state’s deregulated energy market provides scant financial incentives for operators to prepare for the rare bout of extremely cold weather, according to Reuters.

Natural gas wells and pipelines in Texas do not undergo the winterization of those farther north.

According to the Poweroutage.us tracking site, more than three million residential, commercial and industrial customers were without power in Texas as of Tuesday night.

In the state capital Austin, the temperature dropped to 10 degrees Fahrenheit — well below February’s average low of 45F. By contrast, thermometers in Anchorage, Alaska, read 20F.

Joshua Rhodes, an energy researcher at the University of Texas in Austin, said the electric grid fell victim to a cold spell that was longer, deeper and more widespread than the state had seen in decades.

“The system as we built it is not performing to the standards we would like to see,” he said. “We need to do a better job. If that involves paying more for energy to have more reliability, that’s a conversation we’re going to have to have.”

Climate change also should be factored in, he added.

Meanwhile, the Galveston County Medical Examiner’s Office, which covers for three counties, has requested a refrigerated truck to expand its body storage.

Judge Mark Henry, the top county executive, could not immediately provide details on why the extra capacity was needed or on the number of weather-related deaths in his 340,000-person county. But he’s worried.

The Arctic air mass descended over much of the country, pushing temperatures to historic lows on Tuesday, said meteorologist Lara Pagano of the National Weather Service’s Weather Prediction Center in College Park, Maryland.

In Lincoln, Nebraska, a reading of minus 31 degrees Fahrenheit shattered a record set in 1978 of minus 18F.

In Mississippi, people woke up to discover much of the state transformed into a snow-and-ice-covered landscape. Authorities were reportedly struggling to clear roads, as they did not have plows because the state so rarely needs them.

On Tuesday, President Joe Biden offered his administration’s assistance in a call with at least seven governors of states impacted by the severe weather.

The White House said Biden told governors that he and his wife were praying for their citizens and pledged to deploy federal emergency resources as needed.

Meteorologists blame the historically chilly weather on a large disruption of the polar vortex with Arctic weather that’s normally located near the North Pole, but it escaped and sent cold temperatures south.

The vortex is stronger and longer than usual, experts say, and these events are happening twice as often as they used to. 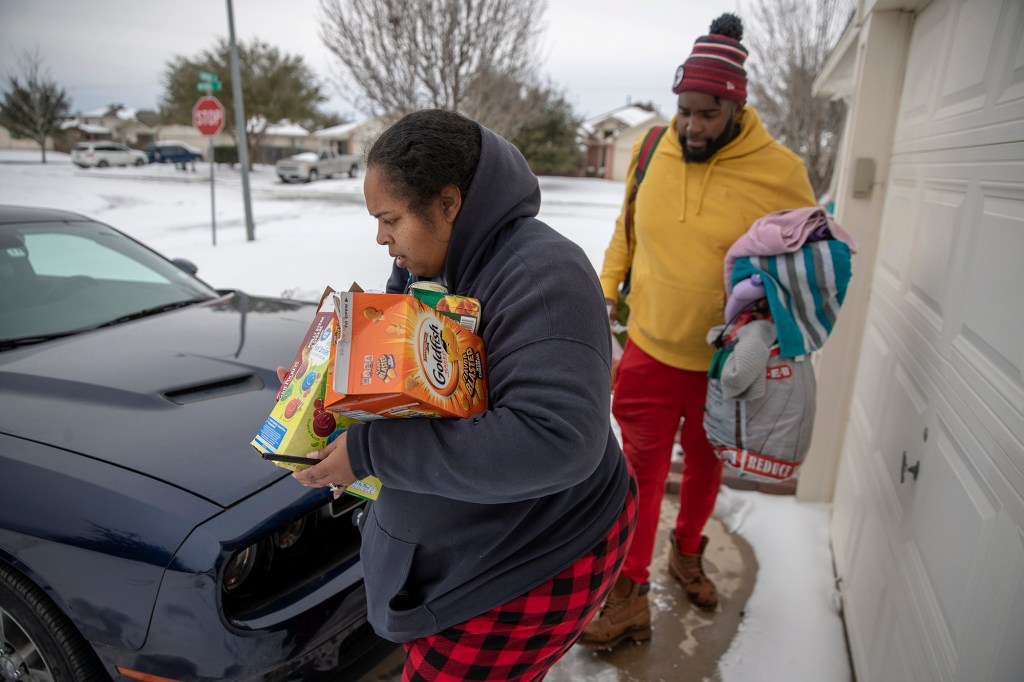 A couple carrying food from their home to bring to a hotel after losing power in Hutto, Texas, Tuesday, Feb 16, 2021. 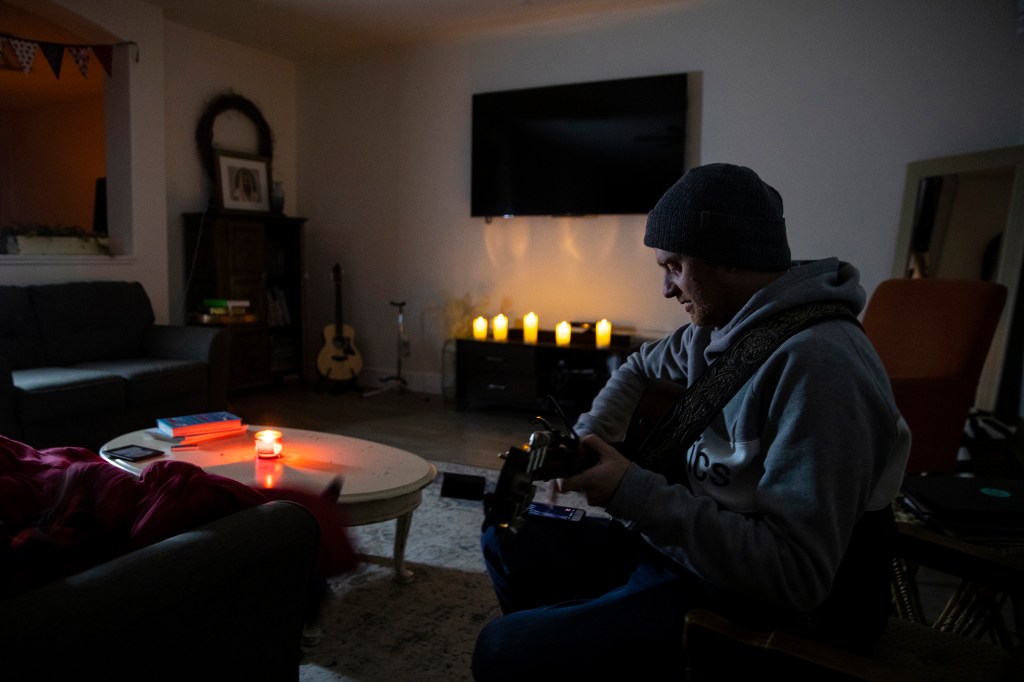 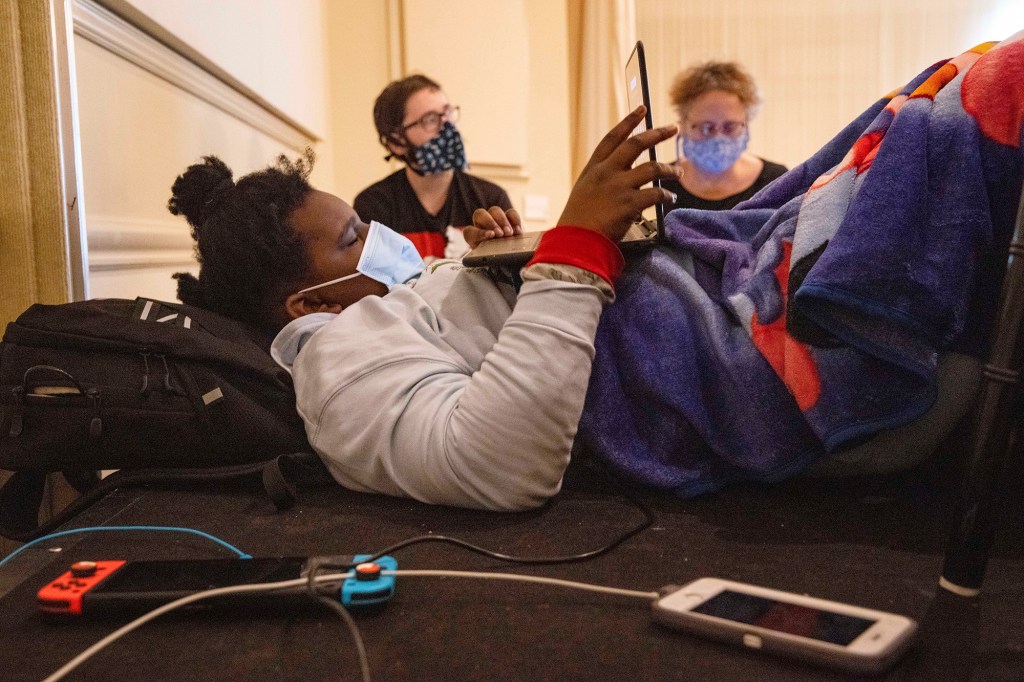 A girl uses a laptop while seeking refuge from the cold with family at the warming center located at Ruthe Jackson Center in Grand Prairie, Texas, Tuesday, Feb. 16, 2021. 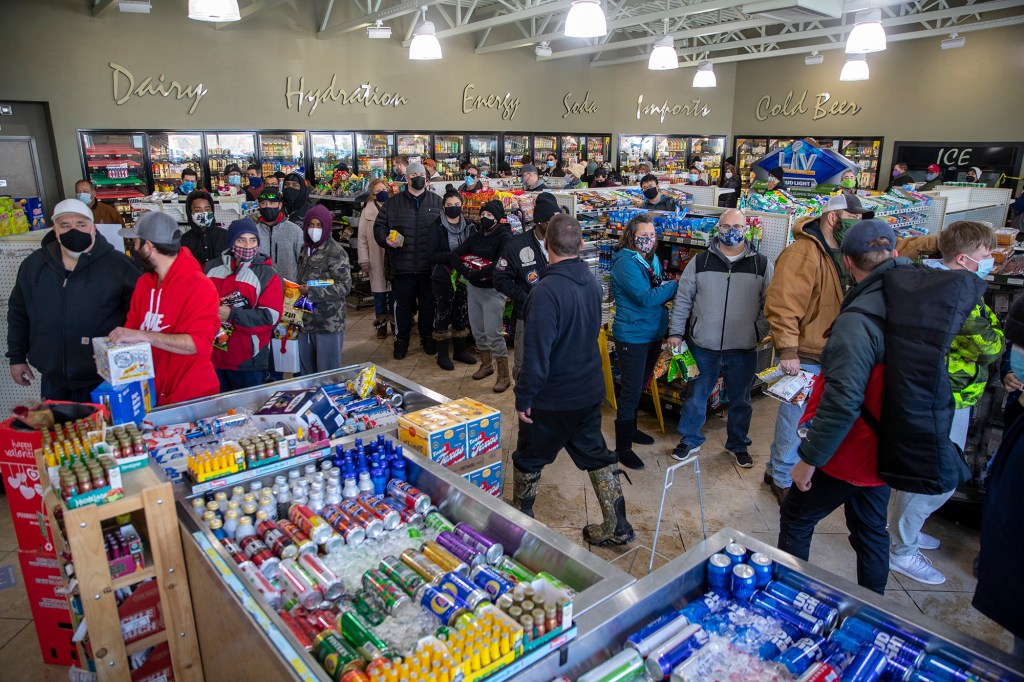 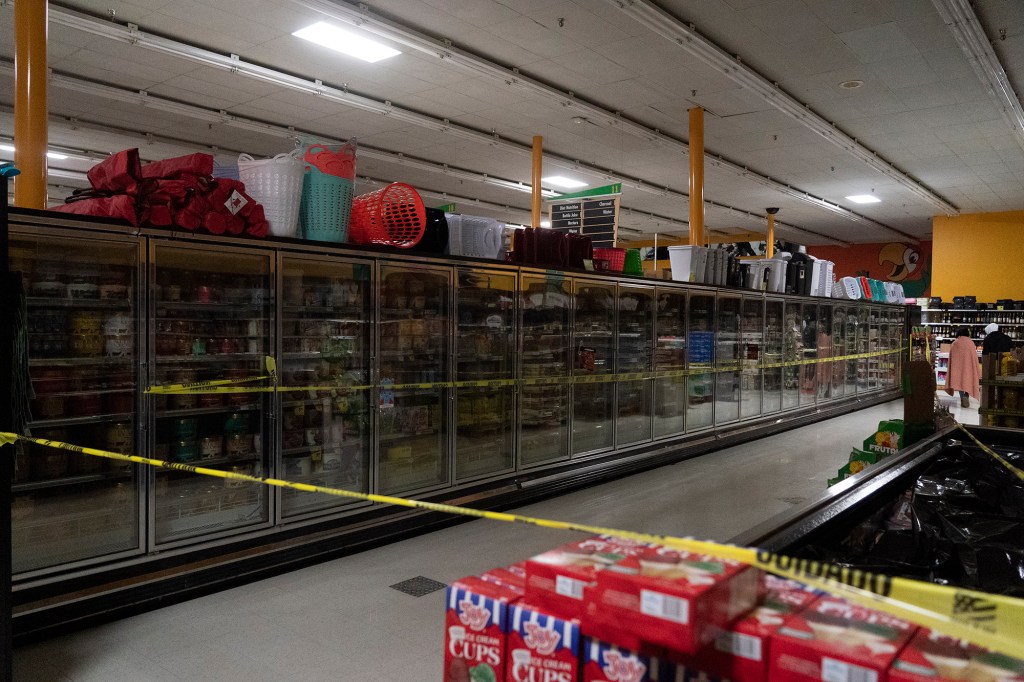 Freezer sections are closed off in Fiesta supermarket on February 16, 2021 in Houston, Texas. 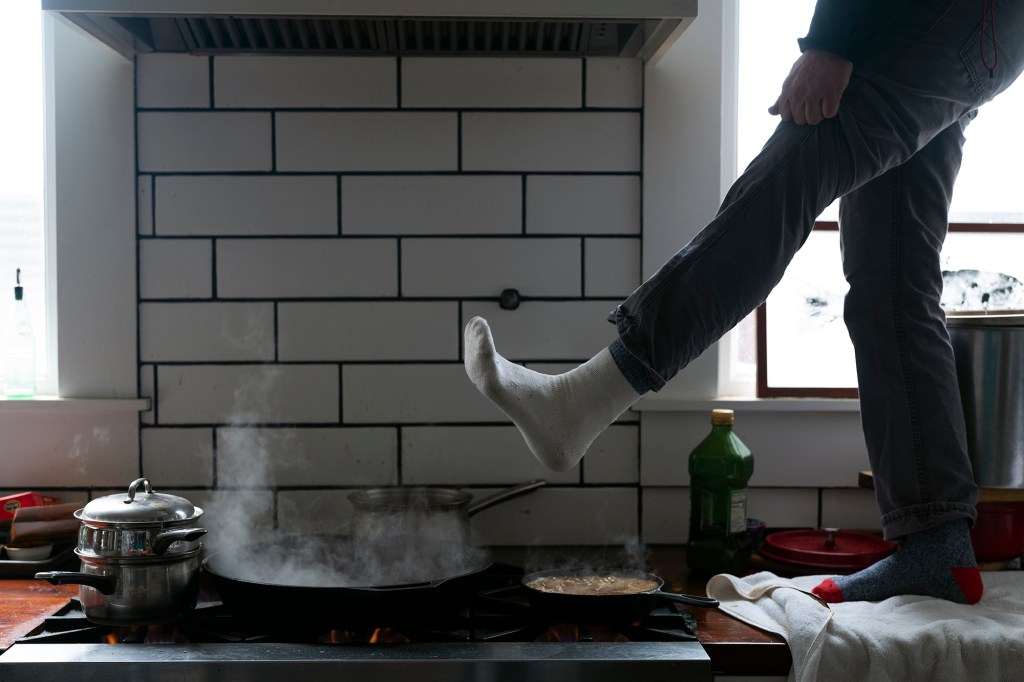 A man stands on his kitchen counter to warm his feet over his gas stove Tuesday, Feb. 16, 2021, in Austin, Texas. 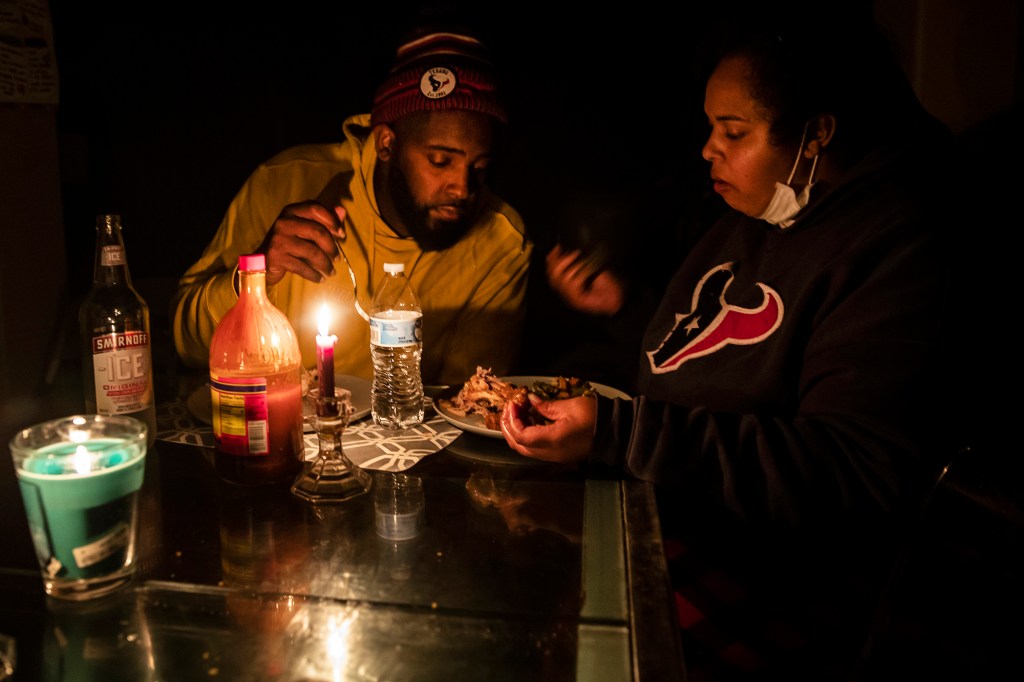 A couple eats dinner with the help of candlelight in the Glenwood neighborhood in Hutto, Texas, Tuesday, Feb 16, 2021.

“One thing that Texas situation highlights is that we are likely to deal with more compound extreme weather events — multiple event weather systems that have cascading impacts on society and our infrastructure,” said Marshall Shepherd, a University of Georgia meteorology professor.