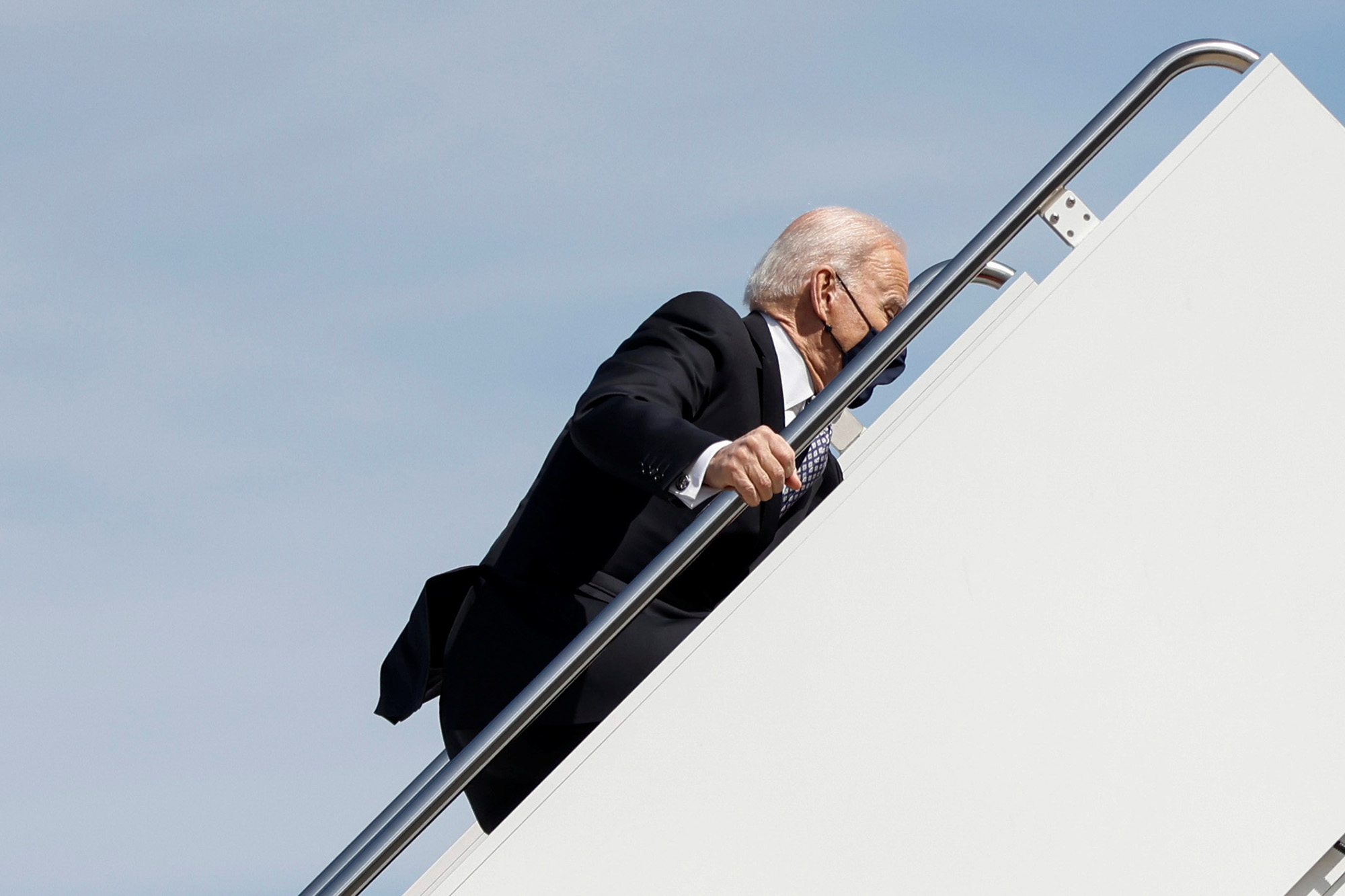 The Issue: The lack of coverage of President Biden’s stumbles on the steps up to Air Force One last week.

The Post seems to be alone in reporting about President Biden’s latest missteps boarding Air Force One (“Slidin’ Biden,” March 20).

The Democrats are solely to blame for allowing someone as frail and in as obvious cognitive decline as Biden to become their candidate for POTUS. They all knew he was no longer capable of assuming the rigorous duties of the hardest job in the world.

Other countries must be laughing at us, and I don’t like it one bit.

The Biden White House, which promised transparency and honesty to the American people, claims that Biden’s multiple stumbles on the steps up to Air Force One were the result of a stiff breeze.

I ask my fellow Post readers a simple question: When was the last time you were repeatedly blown to the ground by the wind?

Just imagine if former President Donald Trump had tripped three times while walking up the steps to Air Force One.

The media would have accused him of being inebriated, on drugs, experiencing a stroke, etc.

On the other hand, Biden’s three trips were attributed to heavy winds. The hypocrisy is glaring.

Does the media think the American public is oblivious to what is going on?

Biden tripping up the stairs to Air Force One is being handled by the media differently than Trump at the West Point graduation.

News outlets could not have been happier when they thought our president was going through some mental problems then. But Trump was a Republican, and now we have a Democrat as president, so all is well. Their hypocrisy cannot be more noticeable.

We now have a president who is truly suffering from some form of mental decline. That double standard is really sad.

​While attempting to be funny, The Post’s front-page headline, “Slidin’ Biden,” was quite shameful and nothing short of cruel ridicule.

Please respect the president, rather than ridicule the natural process of aging and, by association, older people like me.

What is it going to take for America to wake up and smell the coffee?

Biden’s recent fall on the steps to Air Force One is a clear sign of his physical decline. It goes hand-in-hand with his cognitive flubs. Mainstream media is minimizing these missteps, and therefore misleading the public.

The media is complicit in the downfall of our country. We no longer have independent sources to report to the people. But we can see through the charade.

Trump was relentlessly assailed for his physical fitness throughout his presidency.

An occasion when he drank a glass of water with both hands was widely reported as evidence of dementia, and his slow descent down a ramp at West Point was also broadcast as a demonstration of infirmity.

Had it been Trump stumbling on the stairs up to Air Force One, we’d have been deafened by a screaming wall of outrage demanding that he be declared unfit and removed.

That the media is now either participating in a conspiracy of silence denying that Biden’s fall never happened or trying to laugh it off and hand-wave it away as “just the wind” is proof positive of the network media’s unfair bias and downright hypocrisy.

Biden tripping three times while ascending the stairs to Air Force One is an apt metaphor for him and his policies: There is no backbone.

I suppose it was right that a White House press secretary blamed the incident on windy conditions. It doesn’t take much to knock over an empty suit.

Want to weigh in on today’s stories? Send your thoughts (along with your full name and city of residence) to letters@nypost.com. Letters are subject to editing for clarity, length, accuracy and style.

Written By
admin
More from admin
[ad_1] Although he’s regarded as one of boxing’s most exciting young fighters...
Read More