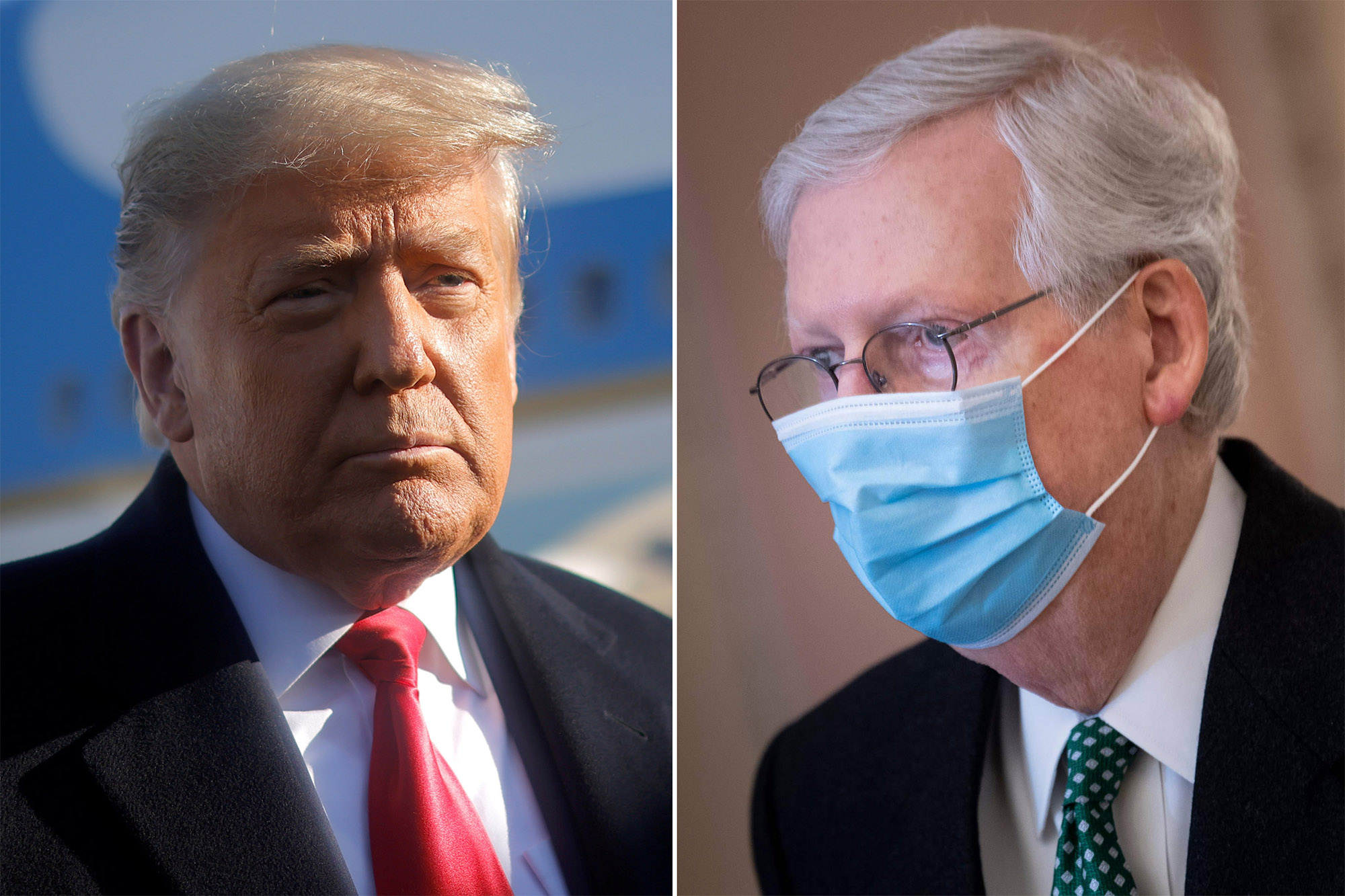 Former President Donald Trump on Tuesday issued a blistering attack on the most powerful Republican in post-Trump Washington, calling Senate Minority Leader Mitch McConnell an “unsmiling political hack” who should be thrown out of office.

“The Republican Party can never again be respected or strong with political ‘leaders’ like Sen. Mitch McConnell at its helm,” Trump said in an emailed 626-word statement that all but declared political war on the Kentucky Republican.

“McConnell’s dedication to business as usual, status quo policies, together with his lack of political insight, wisdom, skill, and personality, has rapidly driven him from Majority Leader to Minority Leader, and it will only get worse,” Trump said.

“The Democrats and Chuck Schumer play McConnell like a fiddle—they’ve never had it so good—and they want to keep it that way! We know our America First agenda is a winner, not McConnell’s Beltway First agenda or Biden’s America Last.”

The statement comes one day after McConnell appeared to make an effort to patch up a GOP divide over Trump’s just-concluded impeachment trial for allegedly inciting the Jan. 6 Capitol riot.

McConnell told the Wall Street Journal, “I’m not assuming that, to the extent the former president wants to continue to be involved, he won’t be a constructive part of the process.”

On Saturday, McConnell voted to acquit Trump of “incitement of insurrection” but tore into him afterward in a Senate floor speech, saying Trump was “practically and morally responsible” for the violence that killed five. He called Trump’s claim to have actually defeated President Biden in the Nov. 3 election a “crescendo of conspiracy theories orchestrated by an outgoing president who seemed determined to either overturn the voters decision or else torch our institutions on the way out.”

“In 2020, I received the most votes of any sitting President in history, almost 75,000,000. Every incumbent House Republican won for the first time in decades, and we flipped 15 seats, almost costing Nancy Pelosi her job,” he said.

“Republicans won majorities in at least 59 of the 98 partisan legislative chambers, and the Democrats failed to flip a single legislative chamber from red to blue. And in ‘Mitch’s Senate,’ over the last two election cycles, I single-handedly saved at least 12 Senate seats, more than eight in the 2020 cycle alone—and then came the Georgia disaster, where we should have won both U.S. Senate seats, but McConnell matched the Democrat offer of $2,000 stimulus checks with $600.

“How does that work? It became the Democrats’ principal advertisement, and a big winner for them it was. McConnell then put himself, one of the most unpopular politicians in the United States, into the advertisements. Many Republicans in Georgia voted Democrat, or just didn’t vote, because of their anguish at their inept Governor, Brian Kemp, Secretary of State Brad Raffensperger, and the Republican Party, for not doing its job on Election Integrity during the 2020 Presidential race.”

Trump continued: “It was a complete election disaster in Georgia, and certain other swing states. McConnell did nothing, and will never do what needs to be done in order to secure a fair and just electoral system into the future. He doesn’t have what it takes, never did, and never will.”

The ex-president, who polling indicates remains a powerful GOP figure, indicated that the break with McConnell will be permanent after the two worked together during his four-year term on common goals such as tax cuts and three Supreme Court confirmations.

“My only regret is that McConnell ‘begged’ for my strong support and endorsement before the great people of Kentucky in the 2020 election, and I gave it to him. He went from one point down to 20 points up, and won. How quickly he forgets. Without my endorsement, McConnell would have lost, and lost badly. Now, his numbers are lower than ever before, he is destroying the Republican side of the Senate, and in so doing, seriously hurting our Country,” Trump said.

“Likewise, McConnell has no credibility on China because of his family’s substantial Chinese business holdings. He does nothing on this tremendous economic and military threat.”

McConnell said last month that the rioters who disrupted certification of Biden’s win were “provoked by the president” and his Chinese-American wife, former Transportation Secretary Elaine Chao, was the first Trump cabinet member to resign over the violence. Chao’s father, who fled to Taiwan during the Chinese Civil War, and brother-in-law are prominent international businesspeople.

Trump continued: “Mitch is a dour, sullen, and unsmiling political hack, and if Republican Senators are going to stay with him, they will not win again. He will never do what needs to be done, or what is right for our Country. Where necessary and appropriate, I will back primary rivals who espouse Making America Great Again and our policy of America First. We want brilliant, strong, thoughtful, and compassionate leadership.

“Prior to the pandemic, we produced the greatest economy and jobs numbers in the history of our Country, and likewise, our economic recovery after Covid was the best in the world. We cut taxes and regulations, rebuilt our military, took care of our Vets, became energy independent, built the wall and stopped the massive inflow of illegals into our Country, and so much more. And now, illegals are pouring in, pipelines are being stopped, taxes will be going up, and we will no longer be energy independent.”

Trump concluded: “This is a big moment for our country, and we cannot let it pass by using third rate “leaders” to dictate our future!”

Trump was acquitted by the Senate with just seven Republicans joining Democrats voting to convict. The 57-43 vote fell far short of the Constitution’s two-thirds requirement for conviction. Because he was acquitted, Trump remains eligible to run for president again in 2024.

McConnell won’t face re-election until 2026, but 2022 Republican primaries are likely to be a proxy war between pro-Trump and pro-McConnell factions. Trump previously urged a 2022 primary challenge against No. 2 Senate Republican John Thune of South Dakota, who like McConnell voted for acquittal.

McConnell’s office did not immediately respond to a request for comment.

Written By
admin
More from admin
[ad_1] Reddit may have unmasked the top doge. Cryptocurrency enthusiasts on the...
Read More